Home » What is the Difference Between a Comforter and a Duvet? And Which One is Right for You? 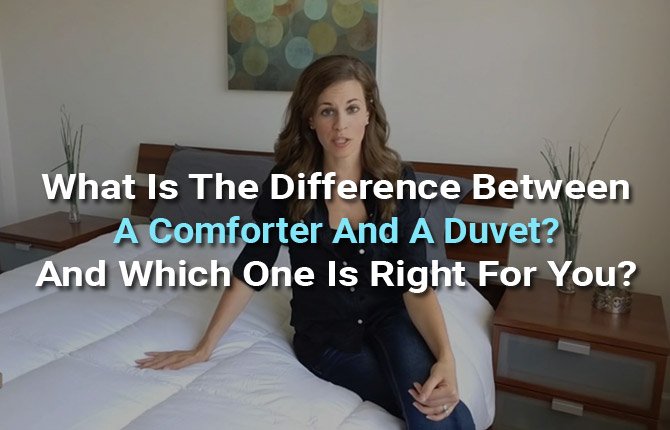 It is hard to believe people used to just walk into a retail store and pick out a bed, a set of sheets, and a comforter and then off they went.

The hardest decision was what color of sheets and comforter were going to be. Nowadays, sleep and comfort have become much more complicated with hundreds of options for bedding.

There are many different mattresses, bed frames, mattress toppers, and sheets as well as duvets and comforters.

Doing a little bit of research can help ease the confusion. One of the things you should know is the difference between comforters and duvets.

While many use the words interchangeably, they are actually two very different things. By understanding what each of these products is, you find the blanket that’s right for you, your sleep habits, and your décor.

When it comes to bedding, many of us think the most important thing is choosing a certain color or style to match our décor but, beyond that, we should consider the kind of blanket we actually want: a duvet or comforter. But how do we know what is best? Here are some hints to help you decide.

Comforter – A comforter is a fluffy, thick blanket with a quilted top. It is used as the top blanket on your bed to give it some style, warmth, and finish.

Comforters are usually filled with synthetic fiber and are usually polyester or cotton blends that are quilted or sewn with a particular pattern across the comforter to hold the inside filling in place.

Comforters usually come in bedding set or with other items such as pillow covers and shams. That way, everything matches perfectly which is great when designing a bedroom.

Comforters can usually be thrown in the washing machine and then tossed into the dryer on low. You can also hang them out to dry if needed, which is always a nice choice because it soaks up that outside sunny smell. Generally, comforters are much easier to care for than duvets.

Duvet – A duvet softer and somewhat flatter than a comforter. The word translates to “down comforter” which is exactly what it is, an ultra-plush quilt filled with synthetic materials or other fillers such as feathers or wool.

Duvets are not usually quilted or stitched and are typically inserted into a cover. Since duvets are meant to be covered, they are usually only found in white, cream, or other neutral shades.

The cover and duvet itself are usually sold separately so you can choose the style and color you want and can easily switch them to match the seasons or your mood.

They are kind of like big, flat pillows and you can change the case as much as you want. Duvets are nice and warm so you most likely won’t need extra blankets. Skipping the top sheet reduces the number of layers on your bed, which is called European style.

Cleaning a duvet is easy if you have a cover on it,  just remove it and throw it in the washer. The duvet itself has to be dry cleaned so they are a little more complicated but you won’t need to worry about it too often if you consistently use a cover. 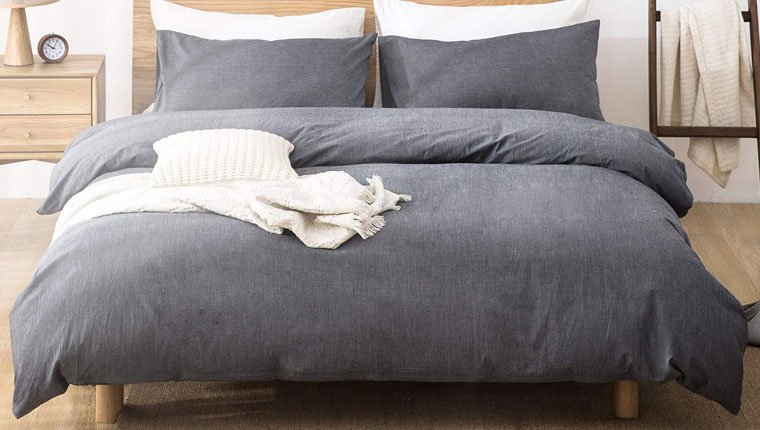 A duvet with a cover is significantly different from a comforter. The cover is essential for a duvet to keep it clean and stop it from having to be dry cleaned as often. The covers can be swapped out, too. Make sure you choose one that has features to help keep the duvet in place – for example, a button-style closure makes it a lot easier to switch. You do not need a perfect fit but get something close so the edges do not drape over the side of the bed too much.

Both comforters and duvets are good for warmth and meant to be the main blanket on your bed. They work with any décor and keep you super comfortable at night.

The difference between a duvet and comforter is fairly basic. A duvet is a warm blanket with a removable cover while a comforter has surface stitching and a permanent cover.

What Is The Best

Few things can affect your choice of duvet or comforter. You can find one in just about any budget range, though keep in mind that a duvet needs an extra cover which is an extra expense. While the cover is washable, the duvet is more difficult to clean and tends to be a little more expensive.

In contrast, comforters are less fussy in the sense that they do not have extra covers to worry about and cleaning them is fairly straightforward as they can be thrown in the washer. The biggest issue with comforters is if they get damaged and tear. Comforters usually come with additional bedding. You can buy them with sheets and shams so which is more economical than buying them all separately. It also makes for easy color coordination.

While the surface covers can be cleaned easily, duvets usually require dry cleaning, as we mentioned. This is especially true if the duvet is filled with feathers or down. The bonus, though, is that the cover is usually easy to clean and can simply be taken off and tossed in the washer. Ask yourself, do you tend to eat or drink in bed? Do you have small children? Do your pets sleep with you? All these things can contribute to spills and stains over time so it may make more sense to buy a comforter over a duvet simply because of cleaning issues.

Comforters are a little thinner than duvets and aren’t quite as puffy. While they have a sleeker design, comforters may require additional sheets, blankets, or quilts if the temperatures are really low at night. Duvets, on the other hand, are thicker and have more loft. They look heavy but can be fairly lightweight. They are almost always warm and usually do not need additional bedding for warmth.

If you are looking to add some style to your bedroom and want to be able to change it without incurring a lot of extra expenses, duvet covers can simply be switched out whenever you want a change. You can find almost any color and textures to match your decor. Just remember that the cover is not always easy to get on the duvet so you may prefer the simplicity of a comforter that you can simply lay across your bed without any fuss. 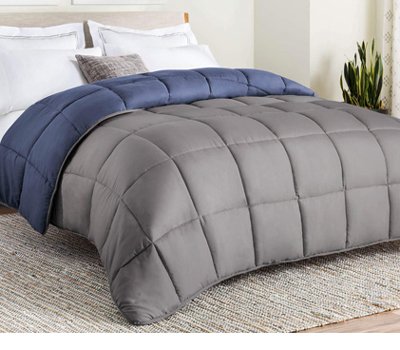 This is one of the market’s best sellers and comes at a great price. You do not have to spend a lot to get a good quality comforter. The shell is made out of 100% polyester and the filling is soft all-season microfiber.

Both are hypoallergenic so there is no risk of sneezing or itchy skin. It comes in various colors to match your décor, some are even reversible and can be easily flipped for a new look. It has a box stitch design to hold the fill in place so it always looks fluffed and full.

This comforter comes with a three-year warranty. It can be washed easily in cold water and tossed in the dryer or hung on the outside line for a quick dry. 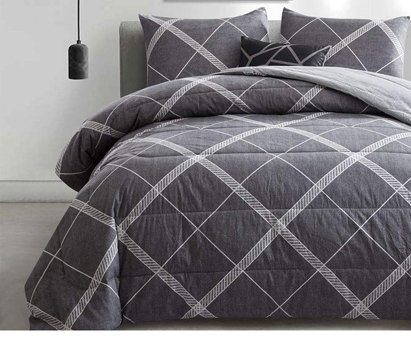 This comforter is made of 100% cotton and filled with very soft microfiber and comes in a set with the comforter and pillow shams.

It is hypoallergenic and easy on sensitive skin. It keeps your bed at a great temperature while being cozy and comfortable.

This comforter is fairly lightweight so not too oppressive for hot sleepers. It has a classic look and comes in multiple colors plus it’s easy to care. This one can be thrown in the washer and dryer for easy care and doesn’t shrink, fade, or unravel. 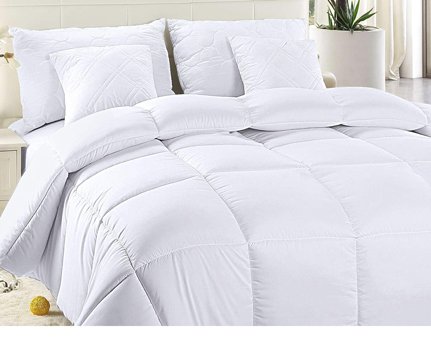 This duvet keeps you warm at night and also finishes the look of your bedroom. It’s well made, gets great reviews, and it comes in well below $50. This duvet is available in all sizes and has loops to secure any cover.

It is filled with a siliconized fiberfill that works in all seasons and has stitching that keeps the fiber in place if you are a restless sleeper. This one is also machine washable, which is unusual for a duvet but certainly a bonus. 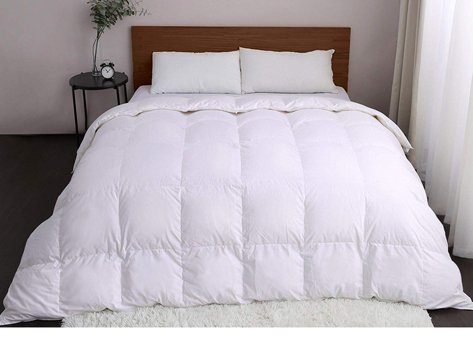 The shell itself is considered down-proof so the duvet can be considered hypoallergenic as the feathers cannot get out and cause an allergic reaction. It is warm, light, and breathable so it keeps you warm while letting air circulate.

The feathers and down are ethically collected to ensure that no animals are cause pain when the feathers are collected. It comes with a three-year warranty.

While there is some confusion about the differences between comforters and duvets, at the end of the day, it comes down to whether you want a warm extra cover that requires some maintenance or one that you can simply be thrown on your bed without much fuss.

Each of these blankets keeps you warm, with the duvet being a little cozier. Duvets are more flexible when it comes to décor as you can simply change the cover with the season or when you want to change the look of your bedroom.

Both comforters and duvets have their pros and cons so it is up to you to decide which features are most important and will work with your sleep habits. There are a lot of options available and items for every budget and they make excellent gifts.