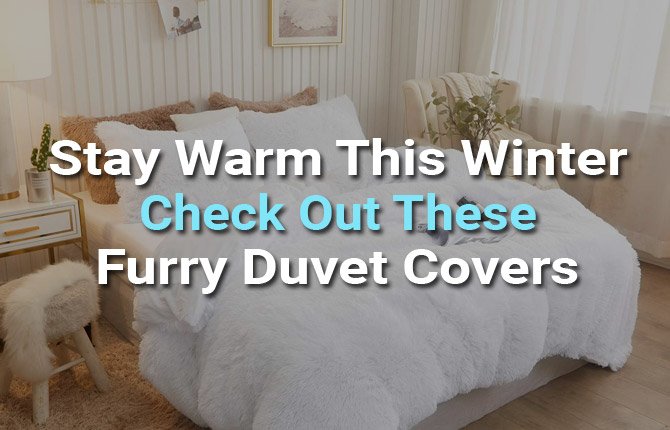 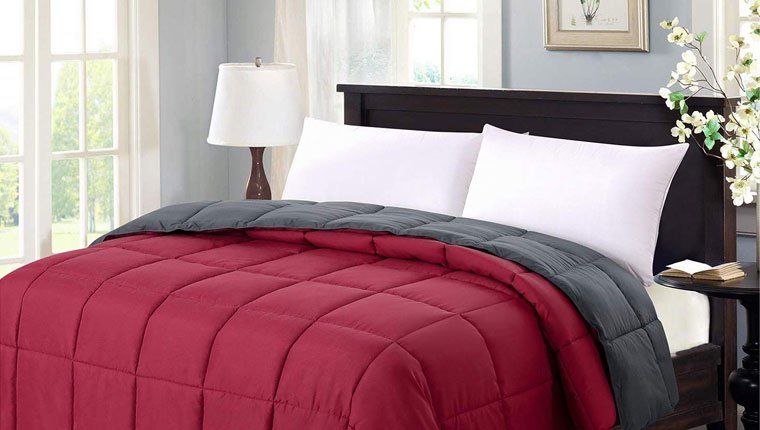 Knowing the difference between a comforter and a duvet is important. A lot of people use the two words interchangeably but they are actually two different things. It is important to understand the characteristics of each so you know what you’re getting. If you buy a comforter thinking you can put a duvet cover on it, you’re going to be disappointed because it’s not going to work. Part of the problem is they can be misidentified online so if you know what makes duvet a duvet and a comforter a comforter, you can be sure to buy the right thing.

Comforter – While both a comforter and duvet keep you warm, a comforter is a thick cover or blanket with s a quilted finish. This cover is usually used as the top layer of bedding over sheets and other blankets. Comforters are often filled with synthetic fiber to make them thicker and warmer. The pattern sewn into them keeps the fill in place, making sure it does not shift around when you move during the night or when the comforter is washed and dried. It also helps make sure the thickness is the same over the whole blanket.

When you buy a comforter, you usually get a set that includes pillowcases and shams so your bedding is color-coordinated. Since everything comes together, you spend less money than if you bought everything individually.

Comforters are also easier to wash. They are usually machine washable on cold and can be thrown in the dryer or hung outside to dry.

Duvet – Lie a comforter, a duvet is a bed cover but it tends to be softer and a little flatter. Duvet literally means “down comforter” in French. They have a very soft cover and are filled with synthetic or feathers, down or wool. Duvets filled with down are best known because of their warmth. There is not as much stitching as a comforter so the filling inside moves around a little more. One of the noticeable differences between a duvet and a comforter is that duvets are used with a cover which makes them very versatile. Duvets and covers are sold separately so you get a lot of flexibility when choosing a décor theme for your bedroom. Choose whatever design and color you like without buying a new duvet each time you want to change the look of your room or spending too much money. Think of it like changing the pillowcase on a pillow – there are a lot of options.

Because duvets are so warm, many people do not use additional blankets or flat sheets, only a fitted sheet on the mattress. Making a bed up this way is called European style and, while it is not as popular in North America, it does make sense. Duvet covers also protect the duvet from dirt and stains. Covers can be taken off and put in the washing machine as needed then dried in the dryer or hung outside. The duvet itself needs dry cleaning if spilled on which is one of the main reasons for using a cover.

A duvet requires a cover. Using a duvet cover stops extra dry cleaning costs and, as mentioned, allows you to change your bedroom décor without spending a lot of extra money on whole new bedding. The covers feature ties to keep the inserted duvet from sliding around too much. They often come with buttons at the bottom so you can easily slide the duvet out to change color schemes. You do not need a cover that’s the exact measurements of the duvet but finding one that is close gives a neater look when the bed is made because there won’t be excessing overhang on the edges.

Now that you know the differences between a comforter and duvet, you can better understand what you’re looking at online. A lot of products call themselves comforters when they are actually duvets and vice versa. Makes sure the product needs a cover. This is the biggest indicator that it’s a duvet, no matter what the description says. Once you have bought your duvet. then you can begin looking for a furry duvet cover to keep you warm and add some fun texture to your bedroom décor. 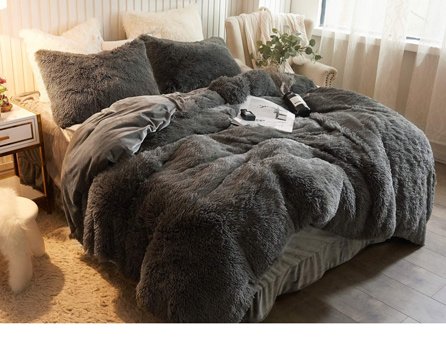 This warm and stylish furry duvet cover features a 100% polyester microfiber front with a plush velvet fabric back. It comes in various fade-free colors and will not wrinkle, pill, or bunch. While this duvet is really warm, it’s also breathable, ideal for cold winter nights.

It comes in various sizes and can also be bought as a set that includes two pillowcases. This cover’s furry fabric is unique. Not only is it luxurious and comfortable, but it’s also cozy for reading or watching TV before you fall asleep.

The is a hidden zipper so its easy to remove for cleaning. Inside, there are corner ties to help keep the duvet in place when it is on the bed. To wash the cover, simply turn it inside out and run it through the washing machine on a cold cycle using bleach-free detergent.

This one shouldn’t be hung to dry and cannot be ironed but should tolerate the dryer just fine. It comes with a 30-day return policy and replacement if needed. 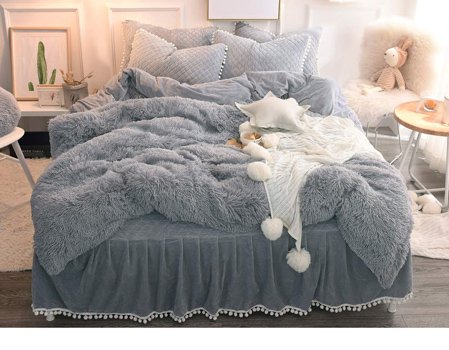 This duvet cover is made of a microfiber plush material that is soft and comfortable. The front is furry and the back is soft crystal velvet mink. It comes in a set with two pillowcases and is fade and wrinkle resistant plus it will not pill over time.

The front furry cover is Mongolian faux fur and the pillowcases feature a diamond quilted in pattern with a pompom style trim for a fun look. The cover has a hidden zipper which makes it easy to wash and care for both the cover and the duvet itself.

There are ties in the corners to help keep the duvet in place, too. This furry cover comes in limited solid colors but you should be able to find something to match your décor. It comes with a 60-day satisfaction guarantee so if you are not happy, simply return it for a full refund. 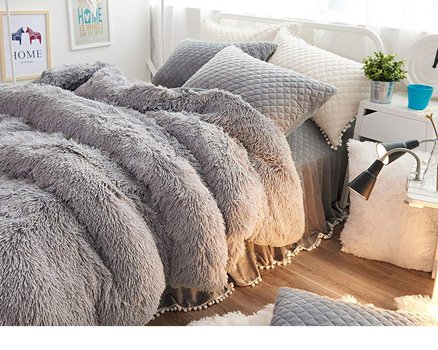 This duvet cover is stylish, warm, and soft. It’s made of faux fur on the top with a warm flannel material on the bottom making it an even warmer and toastier and you ever get two matching pillowcases to tie the bedding together.

This cover can be used as an all-season blanket. You can use it as a comforter itself or add the duvet to keep warm. While weighs six pounds, it’s still really breathable with good airflow plus it’s wrinkle-resistant and fade-free.

This cover is available in various sizes and works for any size bed but make sure to check the size of the duvet itself before buying the cover. Even though it is furry, it is machine washable, just don’t use bleach. You can also tumble dry on low. 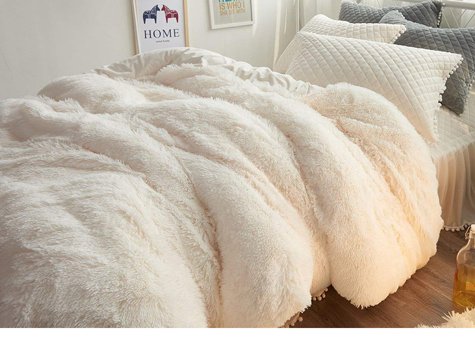 This duvet cover is cozy and stylish enough to fit any bedroom décor. It comes in gray, pink, or white, neutral enough to integrate into the style of your room.

The backing is 100% velvet flannel which adds to its amazing warmth and softness as well as its durability. This cover is available in two sizes so make sure it fits your duvet before you purchase.

A zipper makes it easy to get the cover on and off. To clean, simply put it in the washing machine on gentle in cold water and you’re ready to go. The manufacturer suggests putting the cover in a washing bag but this can be tough because the blanket is so big.

You can also try turning it inside out before washing to reduce wear. It can go into the dryer on a soft tumble dry as well. Read the instructions closely so it lasts as long as possible.

Matching pillowcases are sold separately should you want a full set of matching bedding.

Duvet covers are a versatile way to change up the style in your room without spending a lot of money on replacement bedding. Furry duvet covers are great as many of them can be adapted to the changing seasons and are perfect for the fall and winter.

Some are even light and breathable enough to use without a duvet insert in the warmer seasons. Make sure you get the correct size for your duvet and decide if you want pillowcases to match.

A furry duvet cover is an easy purchase that makes your bedroom versatile, comfy, and stylish. 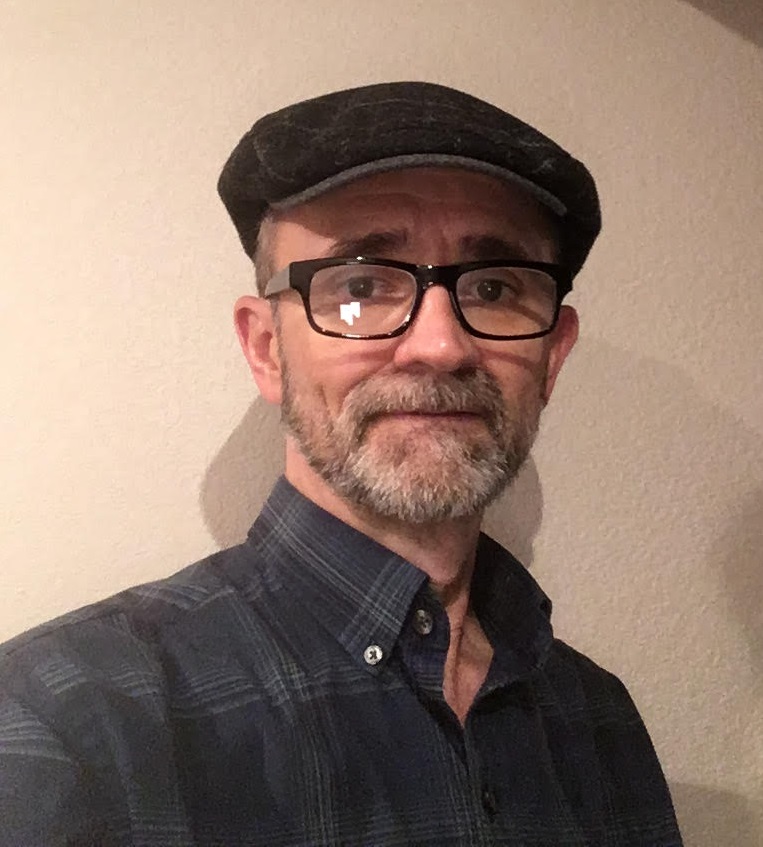